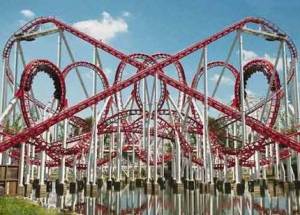 “The most difficult thing is the decision to act, the rest is merely tenacity…”
Amelia Earhart

There is no doubt that the job search can feel like a wild roller coaster ride – one minute you’re up and feeling great, and the next you’re down and discouraged. We may go through times of  interviews and activity, and then times when we have few or no responses. There may be days when we’re confident, and days when it seems anxiety and fear rules – and the “what-ifs” take over. Sometimes we may even feel, “Why bother.”

The emotional ups and downs – the fears and unknowns – are often part of this journey. This especially can happen when a job search lasts longer than expected.

I recently worked with a client who was discouraged and overwhelmed by the length of her search. “Jane” had been laid off as part of a business group re-organization. In the beginning she was motivated and in daily action – setting goals every night for the next day. She had a number of interviews and thought surely after a few months she would have a new position. However, she was surprised to see the search taking longer than expected. Jane’s confidence and activity began to wane. She started to put off looking, saying, “Tomorrow I’ll really get going.” Tomorrow would come and she just couldn’t seem to get focused. She began spending more time watching TV, playing games on her computer, and doing other “non-job search” things to occupy her time. Finally, with the encouragement of friends she reached out for help and contacted me.

In our initial conversations, Jane didn’t feel as if anything would make a difference. “I’m tired of looking and looking with little to show for it,” she said. We acknowledged and talked about the frustrations of this process. As a first step I shared that when we feel stuck, a key to re-energizing is to focus in on a few simple, concrete and achievable steps. As challenging as it may seem, focusing in on a few actions can help by changing our energy and “jumpstarting the engine.”

Jane and I came up with several ideas that were specific and she felt attainable. We redefined success as focusing each day on at least one step/task that she was willing to take and complete. This included:

Jane and I continued to assess her progress. By developing this focused “step” plan she was able to start moving forward again. Just by being able to get up off the couch and in action brought some relief. She also developed a more honest assessment of the emotional impact of the job search, and the ongoing challenges of moving through those roller coaster ups and downs!

Having specific and concrete steps and support is critical to weathering and being successful in the twists and turns of the job search journey.

For ideas and help with your job and career journey, feel free to contact me at janice@janicehellercareercoach.com

Further information is available at janicehellercareercoach.com

I offer an introductory 30-minute consultation by phone. We’ll talk about what you hope to accomplish and what can be achieved through partnering with me.